One reason why I have a blog is because I have always enjoyed writing. I like to write when I feel the need to get something off my chest or to put my feelings down in words. I feel the need to write now because I need to share with all whom I have introduced my little kitten Bailey to, that he has gone over The Rainbow Bridge. 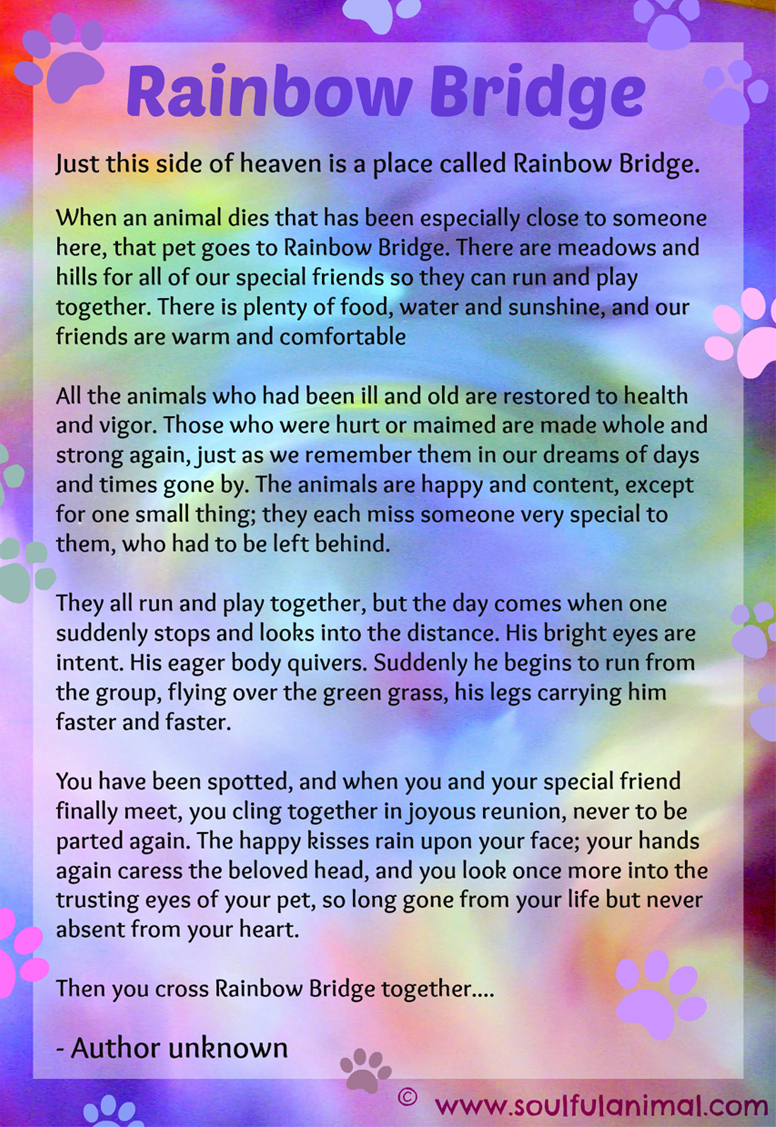 Yes, he has only been with us a short time. How did he snuggle his way into our hearts so fast? I almost can't believe it has only been a few short weeks.

As sad as I am, I am also angry. Angry because he should still be here with us. We entrusted him to a person who should have known how to help him. That's what we paid her a lot of money to do. In the end, at least we learned he was a boy and knew that he left us peacefully.

As you may have read, Bailey was abondoned in our yard at about three and a half weeks old. He took right to eating special kitten food from a saucer. We added kitten milk to it to help him put on weight. He was doing so well. He was putting on weight and acting the playful kitten. He was very curious. 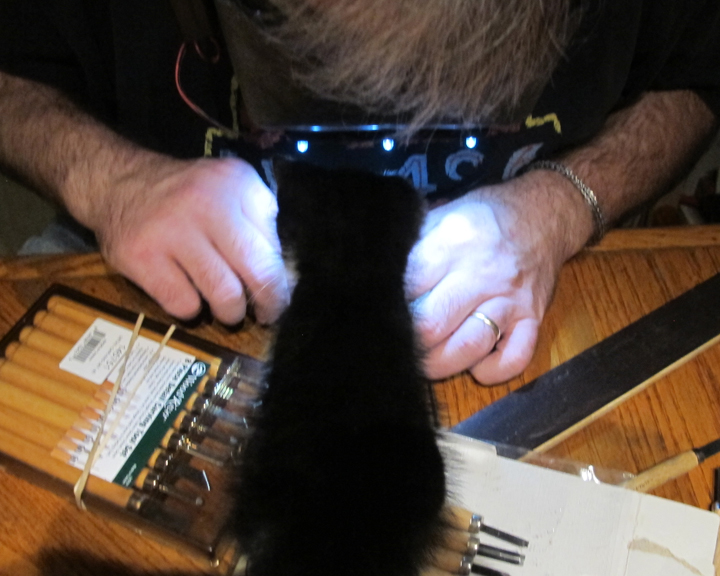 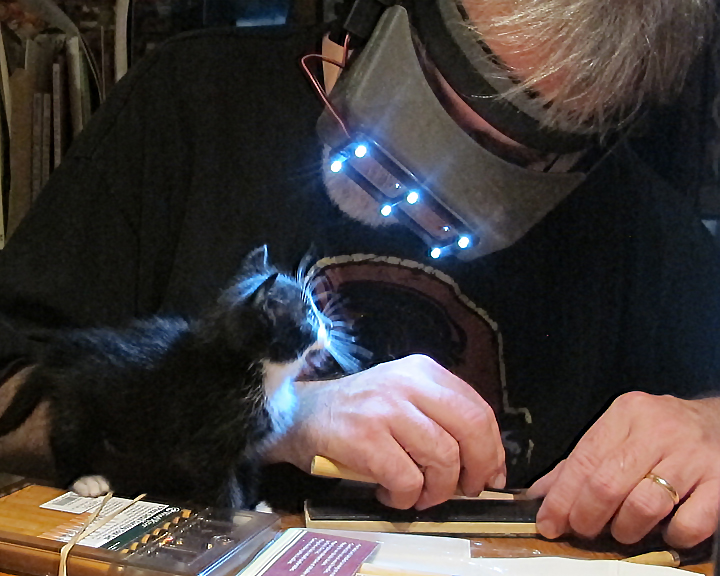 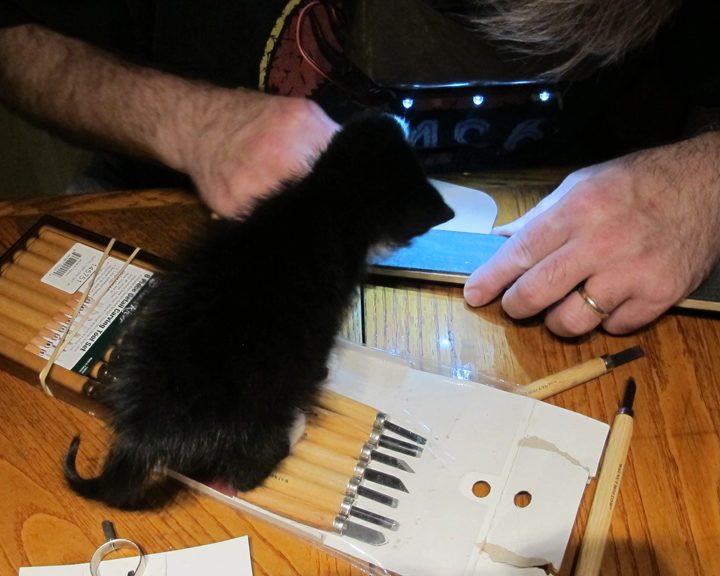 Bailey had to be where the action was and was very helpful, especially when Dad was sharpening his chisels. 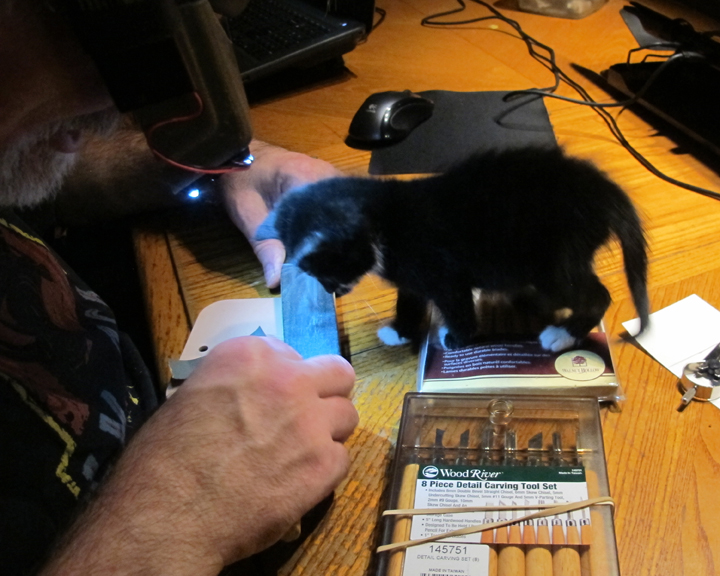 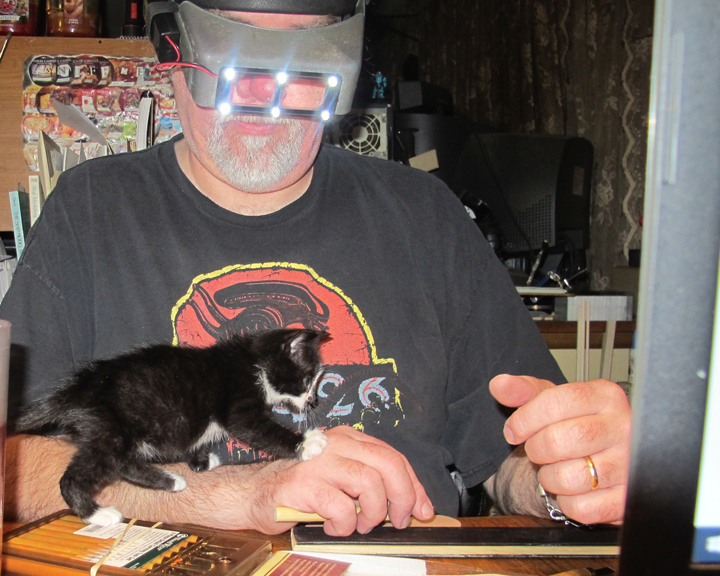 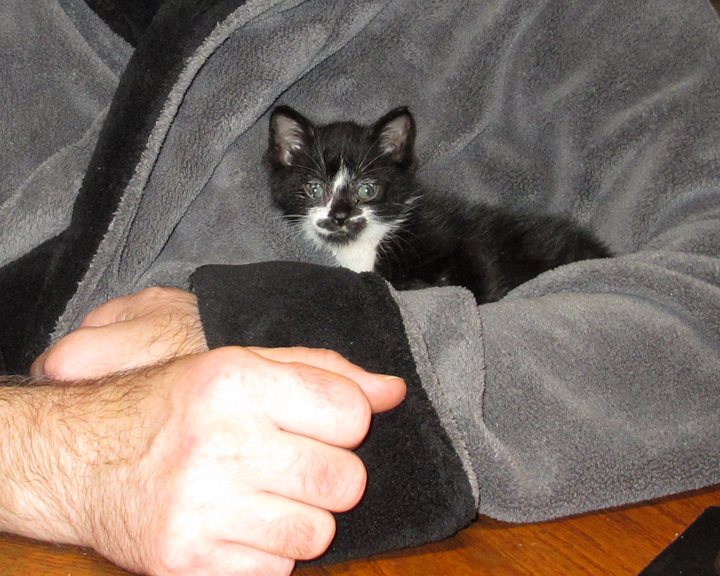 Yes, Bailey loved to be with Dad. Dad had a big fuzzy robe that was nice and comfy, too. 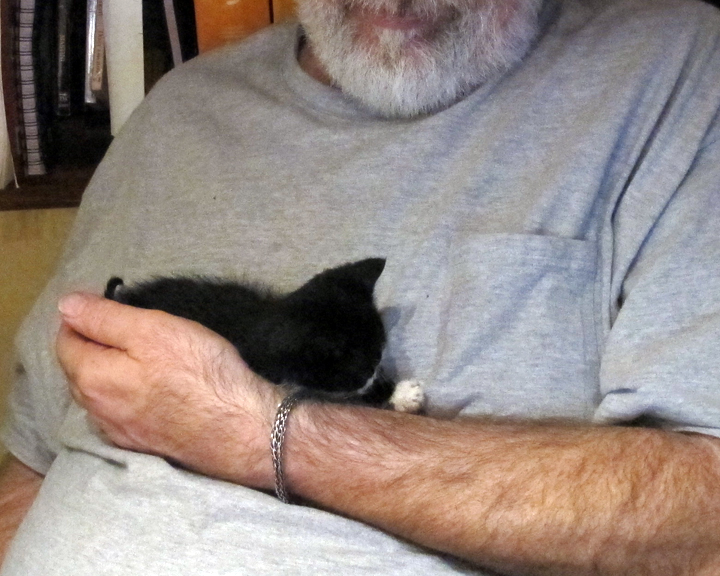 On Tuesday 11-21 we took him in for some eye ointment because he scratched his eye and we got him a worm shot. He had a clean bill of health. He had a few fleas because he was too young for the medicine, but we were bathing him and getting most off them of him. His appetite was great! We took him off the milk because he had put on all the missing weight. I was a little concerned that his litter box was pretty devoid of stools, though.

Thanksgiving night, my husband stayed up with him all night because he was crying every few hours and wanted comfort for his shivering little body.

We tried "stimulating" him to go, added some pumpkin puree and some olive oil. We encouraged him to exercise- all of which should help him go.

Friday morning, I called the Vet again, but couldn't get an appt. By now, I was very worried about his obvious constipation. We took him to an ER vet. We were basically blown off despite his lethargy, crying  and constant need to be comforted. He was still eating and peeing a little. His belly had grown enormous. His legs were splayed out from his belly size and he had trouble walking. The vet sent him home with some special food and said he should "go" in 12 to 24 hours. I specifically asked the vet if he was in any danger and was emphatically told no. But, I wasn't so sure.

By early that evening, less than 12 hours later, Bailey was much worse. He refused food, he just wanted to be cuddled. He tried so very, very hard to use his pan, but he could not produce anything. Then he lost control of his bladder.

I called a different vet ER and brought him in straight away. My husband and I were extremely concerned. This vet was more concerned, too. We were advised that he should spend the night so they could try to vacate his bowels. We left, thinking we would see a perky, kitteny Bailey in the morning.

This morning at 8:00 we got a call about his progress. The vet still seemed optimistic, though she said his bladder had been partially blocked by the back up. We were promised a call at 10. It never came, so we called back. This call, however, was not as optimistic. Reading between the lines, the vet was recommending that we put him down because his bladder had probably burst and his belly was filling with fluid.

I know that if you are reading this, then you love your pets, too. I'm sure you understand our misery which was certainly no match to Bailey's, but we were indeed miserable. It was not even a decision we had to think about. There was nothing else to be done and we felt some peace that he wouldn't be in pain anymore.

But, I am also so damn angry! This was avoidable. Now we are second guessing everything we did or did not do. But, we are not experts. We PAID and trusted an expert to help where there was none. If he had gotten the help he needed at the first vet's office I would be playing with my adorable kitten and be delighted by his escapades right now. And, you know, as much as I want to go on a full on rant right now- it won't bring Bailey back. We are ALL - my whole family - devastated. 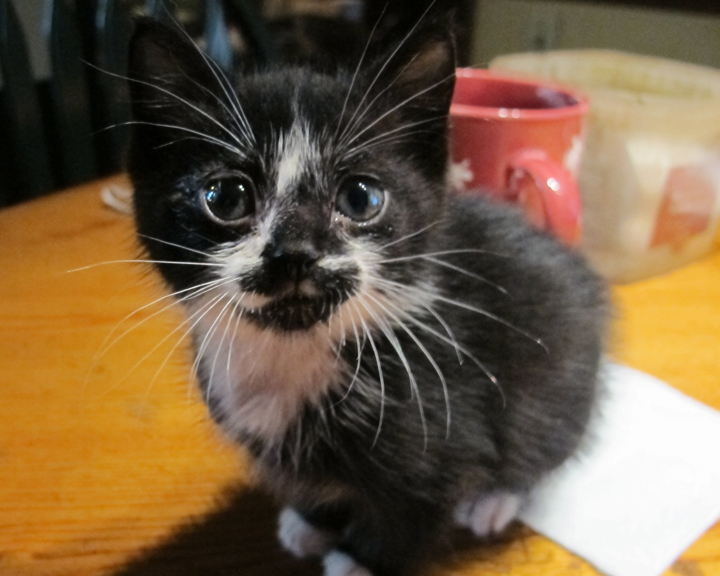 RIP little Bailey- You were loved