I have a client who was recently bitten by the "rock bug". She purchased a few pendants with cabs that really spoke to her. I don't know why but, during our many conversations I never mentioned that I have a rock shop, too. She discovered it on her own after reading some Etsy reviews in my jewelry shop. I carry a lot of interesting and rare materials. She spent some time pouring over the stones and then asked me to make a few pendants for her. Of course, I would!

My client has very good taste and knows what she likes. I sent her pictures of some recent cabs and she picked out some of those those, too. To my utter delight, she allowed me to finish the pendants as I saw fit. I love that! Not every stone wants a fancy wrap, but some scream for the attention.

I settled into the job after finishing up some other custom work. I spent a lot of time considering what I would do. I finished the first piece, a montana agate with prongs with no trouble or hesitation, but the Hell's Canyon petrified sequoia wood with its herringbone pattern and coveted worm holes gave me fits. I had to scrap an entire wrap. That does not happen often! I was a bit shy after that and determined instead of an interesting border wrap, I'd do a beautiful woven bail. That turned out to be the right thing for this piece. I asked the future owner if it was ok to do a patina. She gave me the go ahead. 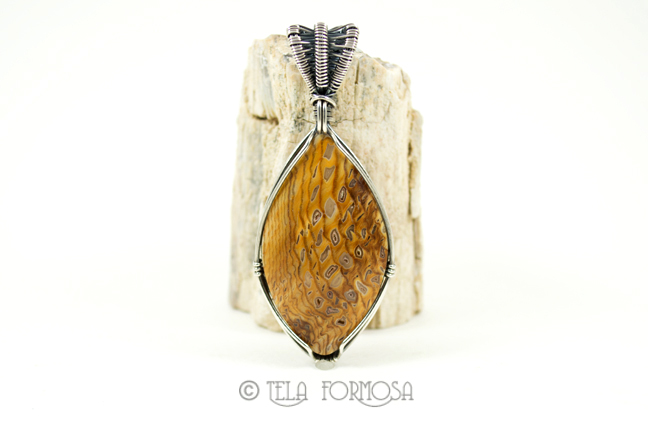 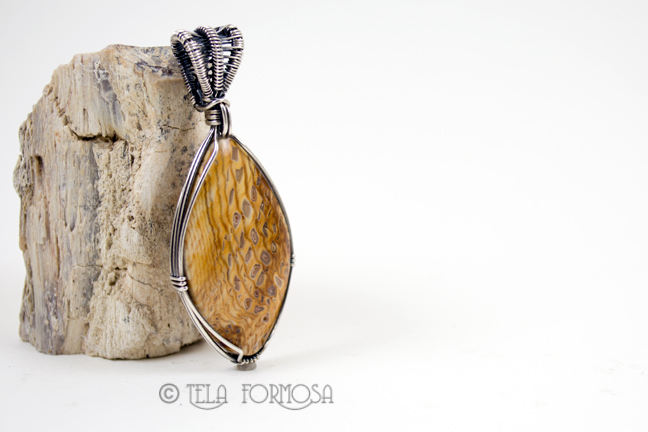 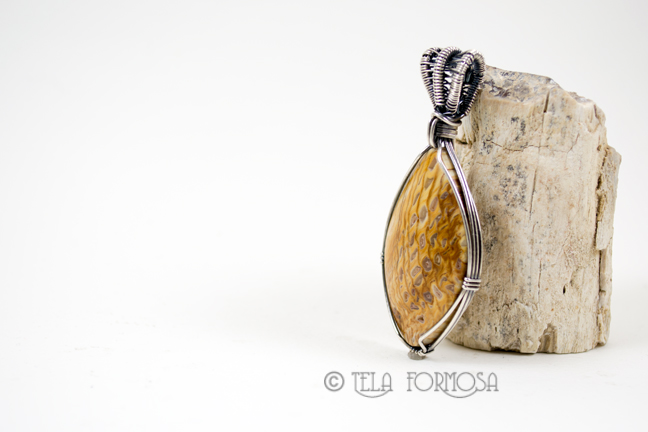 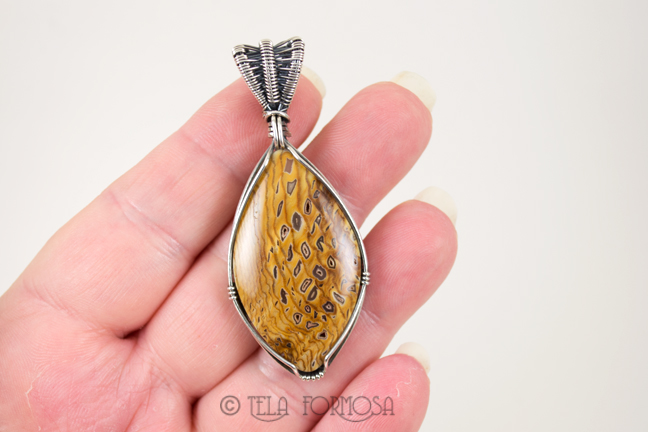 The Hell's Canyon Petrified wood has a great story. It makes excellent jewelry. It is  a great conversation starter because of its unique and beautiful look. The story behind it, though, is even better. Here is the story as I related it to my client:

Back in the 50's, a prospector found this petrified wood in an area which in now underwater after a dam was built. Not knowing what to do with it, he buried it on his property. His family unearthed it after his death and sold it to one person. This one person is the sole provider of this very rare material. I am told that he is down to the last bit of it. It is heavily collected. Now, here's the kicker- I heard, and I believe, that ALL of this petrified sequoia comes from one monstrous tree that fell in prehistoric days. After it fell, it was eaten up by bugs, hence the holes. There it remained and became petrified by a millennial process. This material is known for its herringbone pattern and fortified worm holes.

Next up was the red jasper. This red jasper is quite unusual. It is more red than any red jasper that I have seen. It has only a hint of orange. It cut like an agate, not a jasper; was very hard; took an awesome polish and has some black in it for contrast. I only had a small amount and didn't know where it came from, so I can't get more.

This piece was to be a gift, so I wanted it to be nice. No one wants to give a ho hum gift. I did a fairly simple wrap and added some nice bead accents to the top. I didn't want to obscure any of this fairly small stone. 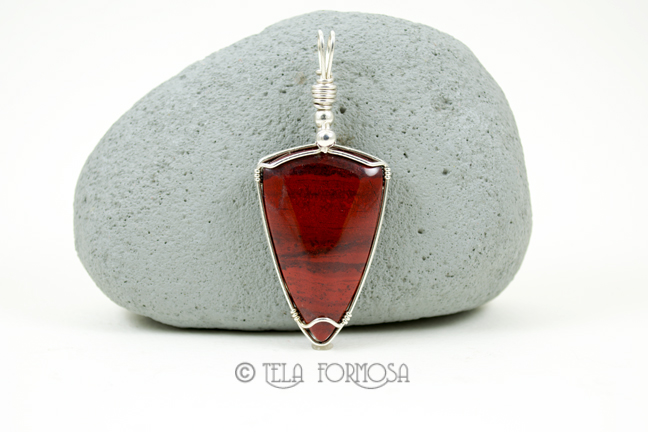 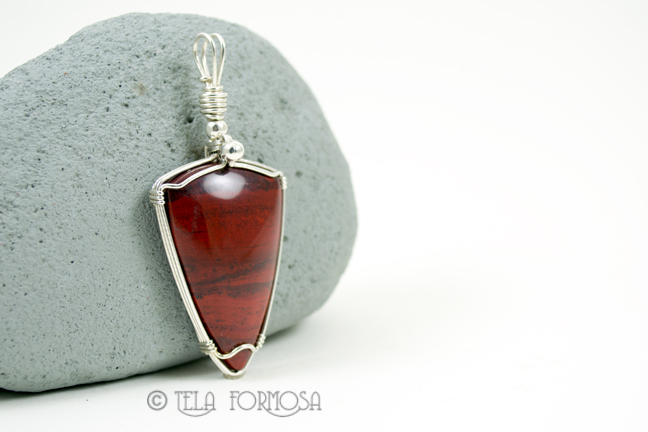 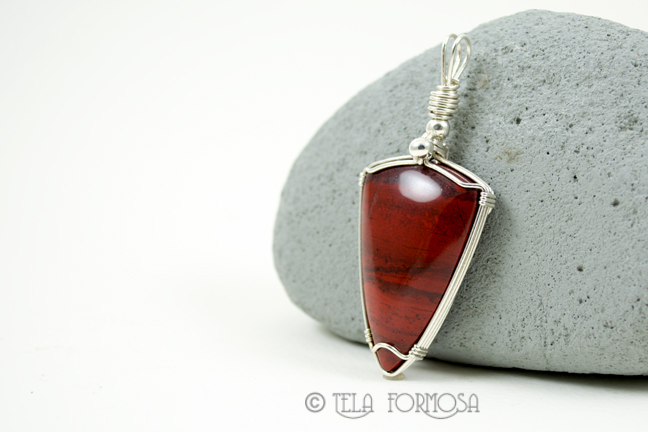 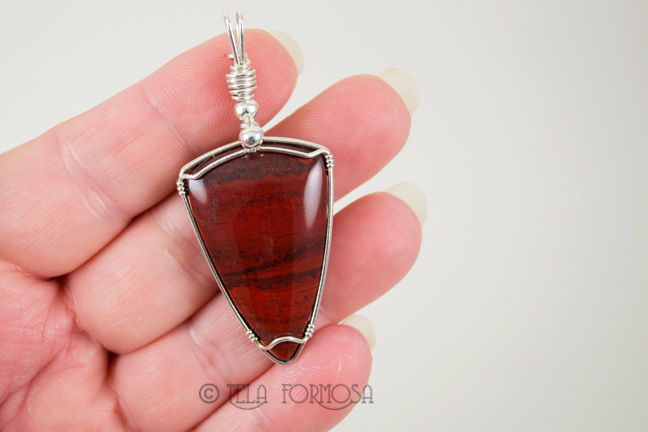 Other than the Montana agate that I linked to previously, the other was a beautiful rich green Imperial Jasper. This is by far my favorite stone. I almost kept it. My first instinct was to use prongs on it, but I settled for what I did because I like the way the wire hugs the shape. Not much to cover the stone, either. 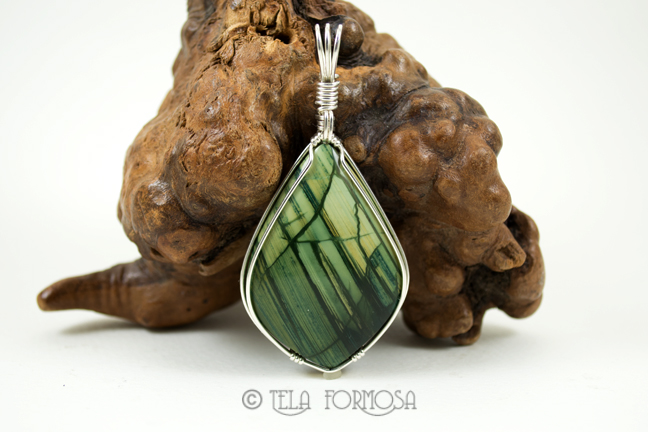 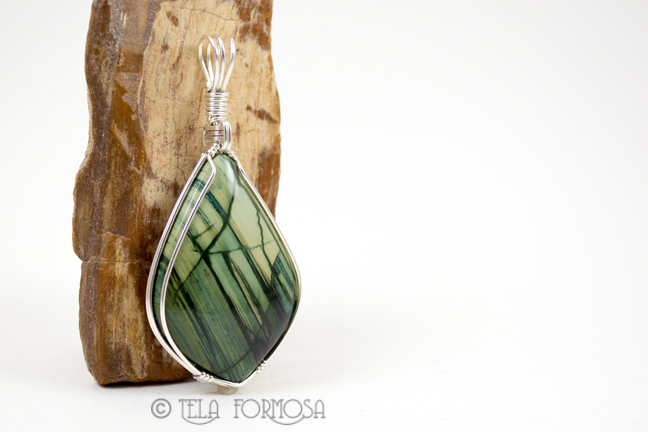 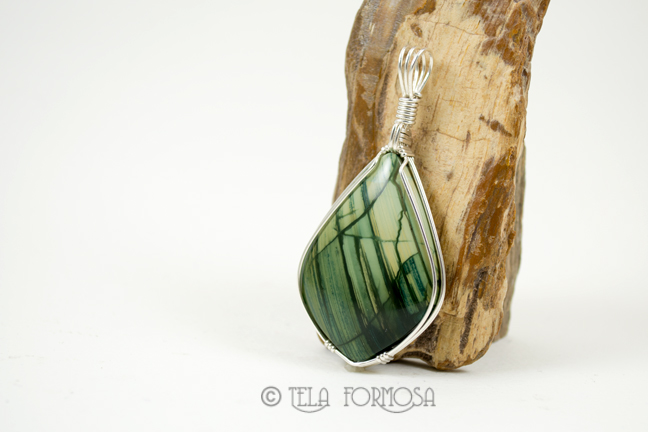 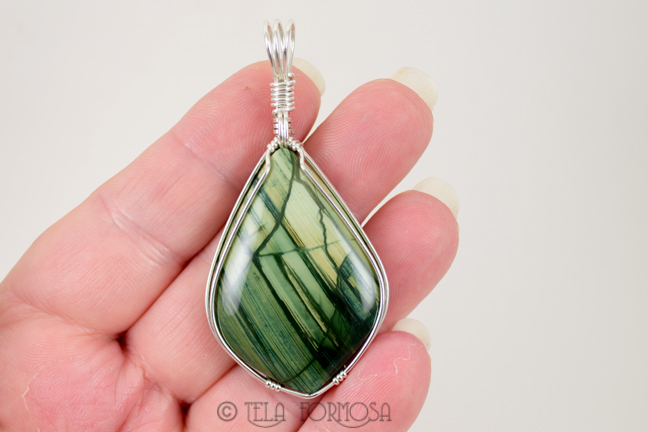 I look forward to having the opportunity to work with my client again. I enjoy doing custom work- especially for fellow rock enthusiasts. Plus, I love to be able to do the kind of wrap that I think will work best with the stone.